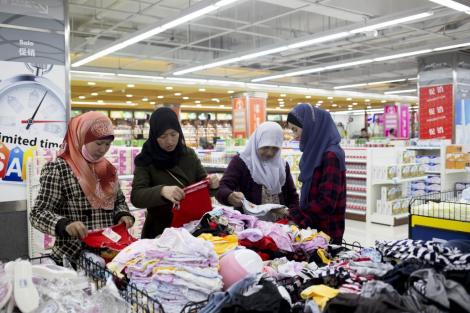 Tens of thousands of Muslims fleeing religious and ethnic persecution in Burma are taking refuge and setting in China. Here is a relevant excerpt from the Myanmar Frontier:

Taking photos is prohibited at the mosque on Zhubao Street, known to Ruili locals as “Myanmar town”. “We have the responsibility to protect the members of our mosque, which has about 3,000 Myanmar and 600 Chinese,” said the imam, Ma Xiao Juan, who is originally from Kunming, the capital of Yunnan Province.

“We do not want pictures of our members to be published because many of them are Myanmar who escaped from their country because of religious reasons,” Mr Ma said.

“If the Myanmar government found out that they are here and asked our government to hand them over, what should we do? It’s the lives of thousands of people. But if we don’t hand them over to Myanmar it could inflame tensions between the two countries,” he said. “The risk is too high.”

Mr Ma said the mosque provided shelter for Muslims from Myanmar after sectarian tensions there flared into violence in 2012 and 2013.

One of the incidents occurred in Lashio, about 130 kilometres south of Muse, when mobs torched a mosque, a Muslim orphanage and other buildings in May 2013. Mr Ma recalled arranging for men armed with dahs to guard the entrance of the mosque 24 hours a day for almost three months. Just weeks ago, 16 surveillance cameras were installed at the mosque, and the video stream is shared with the police.

You can read the fill story here: Myanmar Muslims in China